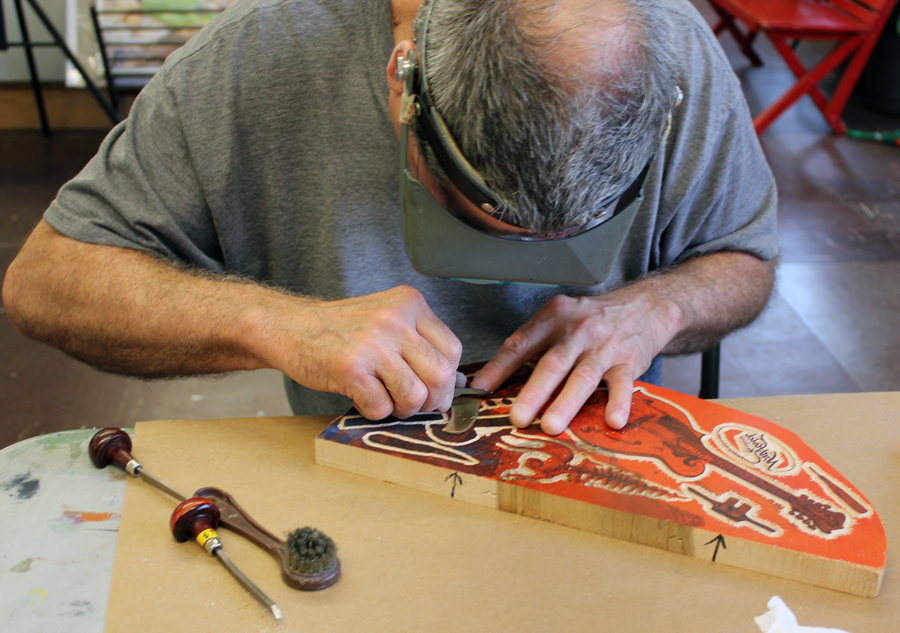 On the fourth day of the WEN annual workshop we enjoyed many activities, including an exhibit of wood engravings curated by WEN and Mirka Hokkanen at the Art Council of Brazos Valley’s Texas Gallery. There were some wonderful works on view from Mirka’s private collection in addition to the WEN traveling exhibit.

The Sead Gallery hosted Inari Krohn’s colorful and inspiring works combining intaglio and Japanese woodcut. Inari’s dreamy and reverent prints transport the viewer to the artist’s Forest in Finland while telling a tale of love and wonder. Inari has a great respect for the natural world and like me, admires Maria Sybilla Merian’s work. Merian, a Dutch engraver was a 17th century naturalist and botanical illustrator whose hand-colored engravings depict insects on their host plants in various life stages and are recognized as the first illustrations of scientific accuracy rather than speculation.

A public “Open Portfolio” event, was a nice way to share work with others and to round out our workshop.

Here are some shots of our hard working attendees – everybody has a different style and pace of working which is a joy to be a part of and to experience first hand.