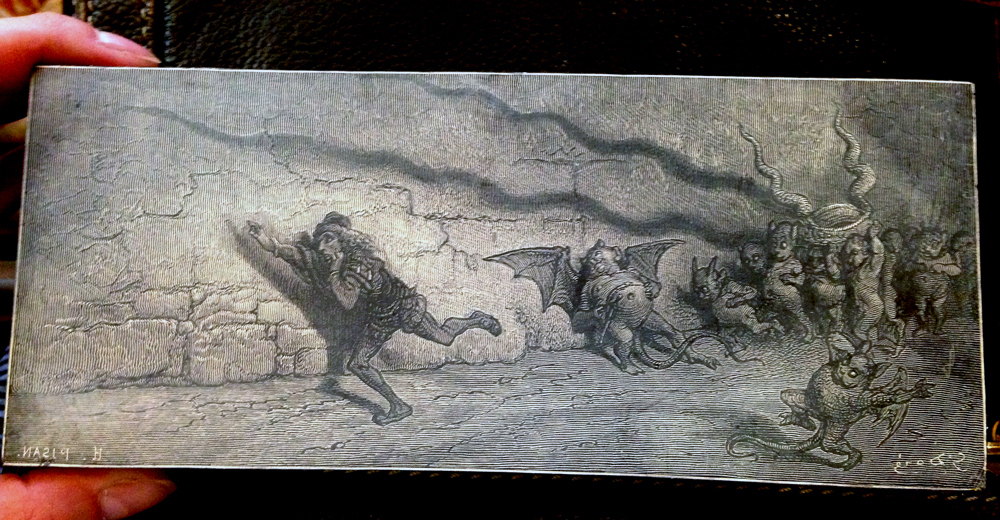 Our conference guest artist, Gaylord Shanilec organized our first stop at The Morgan Library & Museum in New York City. John Bidwell, Astor Curator and Department Head, provided valuable context and insight to the items we viewed – a huge highlight of the journey was seeing Gustave Doré engraved blocks. Many of the wood blocks we viewed (and held) were illustration from Oeuvres de Rabelais – the complete works of Rabelais.

A historical illustration for Harper’s Weekly shows President Lincoln’s casket being carried into the receiving vault at Oak Ridge Cemetery, (drawing by William Waud) 1865. The enormous block has the most meticulous engraving – what’s more – the blocks were separated into smaller pieces so different engravers could work on the illustration separately to finish by their deadline. I count twenty-one blocks split up among several different engravers! The blocks are then reassembled – you can see the screws along the sides of the blocks and you would be able to see them inset from the underside of the block, but paper covers the backs now.

Commercial engraving is a huge part of American Wood Engraving history. There were some beautiful and artistic work in commercial illustration that were developed before the medium was embraced and practiced by artists in the early 20th century.

At the Metropolitan Museum of Art we saw several Dürer woodcuts and engravings. Dürer’s The Sea Monster was particularly interesting and odd – the image shows Poseidon abducting Amymone. The victim is sensually reclined on Poseidon’s merman-like tail and has a rather strange look on her face – not terror, but more like annoyance. Poseidon has a turtle shell shield and a horn atop his head. His mouth is hidden by a long, white mustache and beard. The group ogled a couple Edward Calvert prints – the best printed versions I’ve seen – engravings by Rudolph Ruzicka, Charles Tuttle (WPA artist) Becker’s Jam Session, Louis Barlow’s Cutting Ice, a Vija Celmins engraving, a few wonderful engravings by an American engraver, Grace Albee and a Leonard Baskin print that had everybody drooling. Many, many thanks to Alison Rudnick, the Assistant Curator, Department of Drawings and Prints at The Metropolitan Museum of Art!

Some serious study and contemplating of engravings at The Met.

Thank you NYC! Thank you to all our hosts and organizers!