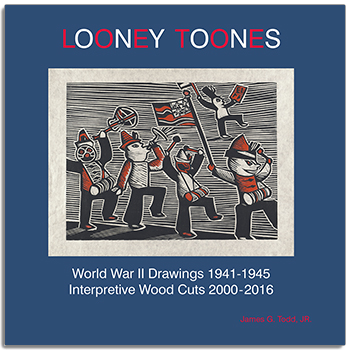 WEN member, Jim Todd has a new book out! Looney Toones: World War II Drawings 1941–1945, Interpretive Wood Cuts 2000–2016 by James G. Todd, JR. was published by the Montana Museum of Art & Culture‘s University of Montana Press, featuring woodcuts inspired by the artist’s childhood drawings. The drawings reflect influences from comic books, WW II, and Native American lore and spurred Todd to maintain the concept of the original drawings, but interpret them anew through his 79 years of knowledge and experience.

The drawings are playful with subject matter one might expect from a young boy – but they are also richly expressive and sophisticated for a 5 to 8 year-old! One of my favorites is the Electric Lantern Show.

The Mother of Christmas

Montana Museum of Art & Culture has an exhibit featuring the drawings and prints from the Looney Toones book – James Todd: Looney Toones through September 9 – check it out!

Wood engraving has been a near constant medium of Todd’s as you can see on the Radius Gallery‘s page of Todd’s fabulous portraits here.

Todd’s concentration in the Humanities is in the social theory and history of art, and he has lectured on topics of art, politics and American culture around the world. His areas of teaching were painting, printmaking, criticism, and the social history of art. He retired from teaching in 2000, but remains an active artist.

Todd has exhibited throughout the United States and internationally. His works are in many collections including the Montana Historical Society, the Jiangsu Provincial Fine Arts Museum in China, the Honolulu Academy of Fine Arts, the Oaxaca Museum in Mexico, Rendsburg Museum, Germany, and the Ashmolean Museum in England.