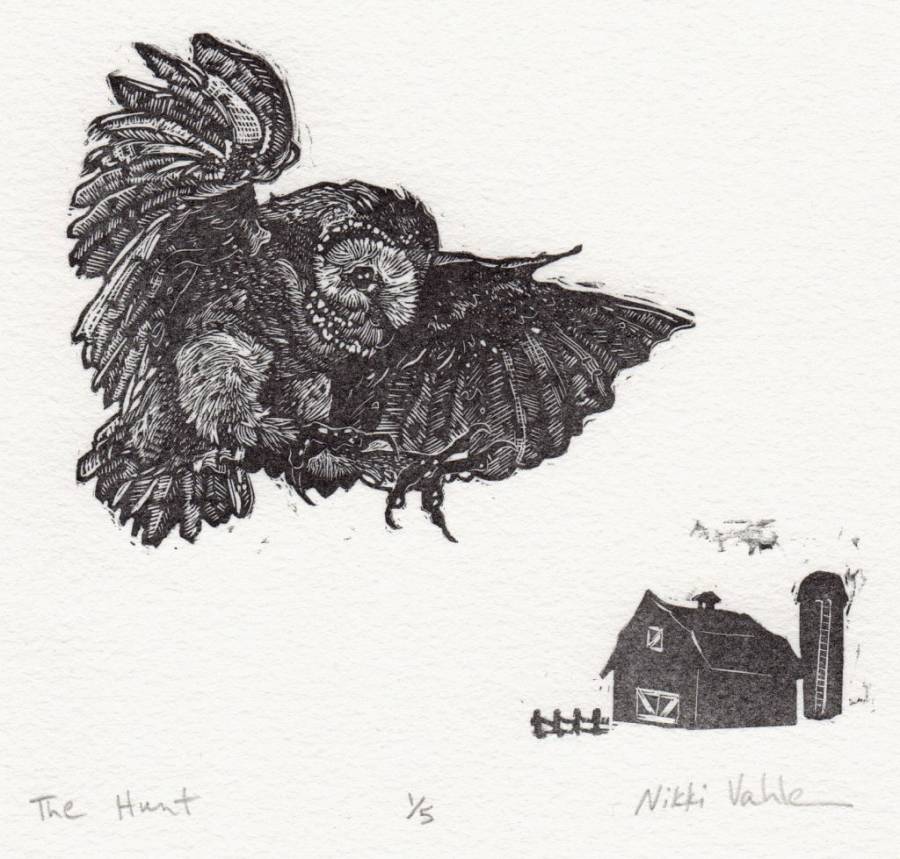 High School students from a 2016 summer writing camp, Words With Wings (organized by the Missoula Writing Collaborative) visited the Wood Engravers’ Network Triennial Exhibition and Dramatic Movements: Frederic Remington’s Early Engravings, 1882–1893 at the Montana Museum of Art & Culture in July 2016 and wrote Ekphrastic poems inspired by their favorite works. The Second WEN Triennial exhibit finished it’s three-year run at the University of Kentucky’s Special Collections Research Center December 16, 2016. We’ve still got another poem to share though! Here is the last one:


Large feathered wings beat
Softly into the night.
There is no sound
Except the
Tiny snowflakes
That lightly touch
The snow-blanketed ground
We can’t hear it,
But he can
The owl with the disc-shaped face,
The sharp beak,
The piercing yellow eyes and
The hooked daggers it has for feet.
He hears the soft patting of
Snow hitting the ground.
But he also hears a mouse
Scurrying beneath the snow
In its complex web of tunnels, the hunt is on.
The owl hovers over the mouse’s tunnels
He strikes the ground, tearing through the grass and snow.
A flurry of powder rises into the air
And settles on the owl’s soft feathers,
Giving them a subtle shine.
He shakes his head, stunned from the dive.
He flaps the ground until he lifts into the air.
He misses though,
So he strikes,
And strikes again
The dead silence
Is broken by his frustrated screams and wails.
The peaceful snowfall has lost its meaning
Because of the owl’s rage.
All the while the lonely barn and silo watch in the distance.